During her residence, Camille Dumond investigates on a book dating back to 1979, titled “Five eyes”. It is a compilation of eleven stories of Moroccan folklore, produced solely in English.

The majority of its authors are deceased, and the act of transcription seems to have locked the narratives in a state that sends back to their original context. With a scope of re-appropriating the stories in the present time, improvisation sessions based on the tales are entrusted to a group of actors from Tangiers.
The research process and discussions take the form of a collaboration. This process is documented by a camera that goes from one hand to another, and becomes an experimental film.

At the same time, interviews on the context of the book publishing are conducted with different individuals, between Tangier and Rabat. The aim is to understand the exclusive function of the language of publishing, the modifications made on the content as translation was carried out and the power relation between the editors and the authors of the narratives. They are accessible in French and Arabic. 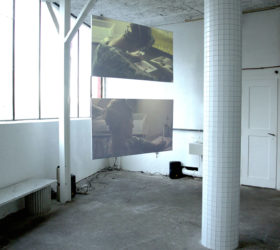 You can find out more about which cookies we are using or switch them off in settings.

You can adjust all of your cookie settings by navigating the tabs on the left hand side.