Côte à Côte (Side by Side/Coast to Coast) is a project of in situ creation by the Italian artist Matteo Rubbi  and the Moroccan artist Yassine Balbzioui, curated by Susana Moliner from La Companyia (Madrid) and Emiliana Sabiu from Cherimus (Sardinia). The project is part of the second edition of the curators zone of Le Cube – independent art room.

Côte à Côte is a project that takes place in Rabat in a first step and will be continued in Perdaxius, Sardinia. The two artists work in collaboration to reveal the social and creative mechanisms between these southern coastal cities.

For this first step, the sky becomes the subject of reflection for Yassine Balbzioui and Matteo Rubbi: the common space between Rabat and Sardinia, between the two hemispheres of the Mediterranean Sea. The night sky as a physical place where the two “coasts” can meet, it is possible to initiate a dialogue, where daily life experiences escape the clear cut and rigid lines that mark the identity and boundaries of territories..

An improbable meeting of Matteo Rubbi and Yassine Balbzioui, between Rabat, Perdaxius, and their sky; A series of experiences, in the shape of a star constellation, which aims to know geographical coasts that separate, but also coasts that serve to breathe, to live.

An exercise of relationships that enables to highlight the role of the artist as mediator and the artist as translator agent of ongoing social processes, which are an attempt of artistic cooperation to realize an inventory of places on worlds which, in the process of disappearing, reinventing themselves, and which, being mutated, are in the process of being. A creation in progress, out of the mirror effect of the opposite spaces, to spotlight the spaces of truth, of a shared imagination, submerged in the in the seabed of the oceans.

Thus, Côte à Côte does not aim to determine what resides between two extremes, but only to go there, to be there, to observe, to participate and live there. Yassine and Matteo hit the road towards the meeting of other artists, their spaces and the relations that bring them together. It is a road made of these two complementary sensitivities who work, negotiate and live together throughout the realization of the project. An exercise, a come and go, to better understand the transformations of a global world through the sharing of concrete spaces where life is experienced.
Susana Moliner 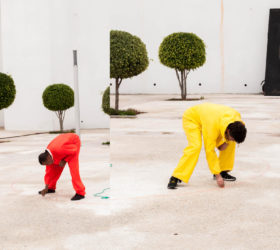