Zainab Fasiki is an independent comic artist, mechanical engineer, and activist for women’s rights in North Africa and the Middle East region (MENA).

With her drawings on taboos and the personal injunctions she addresses to women, Zainab Fasiki denounces the deeply patriarchal societies that she is forced to confront. She describes the profoundly rooted inequalities that characterize gender relationships as well as harassment culture, typical of numerous societies.

The women drawn by Zainab Fasiki can be provocative and fatal, sometimes sarcastic. Naked, in lingerie or veiled, in the city or a hammam, they mock a hypocritical masculism destabilized by bodies.

Following these engagements, Zainab Fasiki develops her new project, Hshouma that consists of a website and a series of comic strips. The word hshouma normally forestalls questions or discussions in Morocco, but Zainab Fasiki appropriates it in order to outsmart its effect and transform it into an invitation to break some taboos.

Thus, the project Hshouma explores the theme of shame and taboos related to nudity and sex.
Zainab Fasiki’s protagonists are drawn in black and white and are deprived of their pupils. As they are represented in such a manner, these heroines can evoke several women, mothers, sisters, and friends in the collective imaginaries.

The women represented in Hshouma do not reveal only their bodies, but also their opinions and need for freedom through texts in Darija, derived from daily spoken conversations. By displaying these statements, Zainab Fasiki uses her project as a banner for so many unheard voices. Her drawings become spaces of expression where the protagonists – and women citizens on a larger scale – transform into spokespersons who militate for their/our rights.

The event with Zainab Fasiki at Le Cube – independent art room takes place following the same perspective. This time of interaction invites the public to reflect collectively on our contexts. In a succession of discussions, testimonies, and position-taking, strategies tend to be evoked, ideas germinate and consciences are strengthened.
Thus, with the project Hshouma, Zainab Fasiki encourages us and the societies that we bear to shift our taboos and rethink our relationship to bodies with an artistic vision.

This project, in its entirety, can neither represent nor answer the complex questions within their diverse contexts. Nevertheless, Zainab Fasiki’s projects open spaces of communication where young people come together and creates spaces for exchange, expression, and sisterhood. .

Documentation
• Website of the project
• Leaflet of the exhibition
• Past press 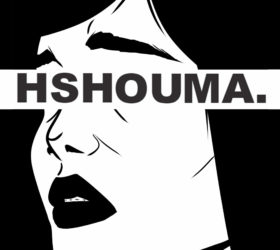