The title of Anna Raimondo’s exhibition refers to the citation by the Spanish philosopher Maria Zambrano, Nous serons heureux de la manière la plus joyeuse (“we will be happy in the most joyous way”), but feminized and its plural form preserved. Like a slogan, a sentence of encouragement, the artist starts from this quote to explore the feminine condition that is mobile and fluctuating, personal and plural at the same time, subject to states of alert in both the private and public space. By reuniting and combining the works, Anna Raimondo problematizes and questions the potential of silence and spoken words as methods of resistance and renegotiation of meaning.

What does being serious and together imply nowadays? Through suggestions that invite to participation, this exhibition by Anna Raimondo provides a space for the de-construction and re-formulation of the term woman in plural.

Through the presented works, the exhibition proposes different tools of research and actions around the position and the engagement of women in the public space.

Through videos, sound pieces, objects and photographs, Anna Raimondo invites to question stereotypes and, on a higher scale, to initiate debates and exchanges on the same concept of being a Woman in heterogeneous and complementary contexts. Thanks to display devices, the space and atmosphere of the exhibition extends to include the street.

Moreover, by making her pieces from surveys conducted in the street, the artist aims to decompartmentalize the construction of knowledge and democratize these questions. In fact, Anna Raimondo does not aspire to account for a global reality, but rather to be surprised and lead by the Other.
Humor and fun are also present, both in actions within the public space and in her artistic productions. An anecdote, a word, a gesture or an everyday life object become the witnesses of a multiple identity which is never fixed, and which is both revealed and questioned.

Also, this exhibition puts into perspective a contemporary preoccupation, thought through different geographical spaces. It is also an opportunity to present, for the first time in Morocco, works realized by the artist during her residency at Le Cube – independent art room or earlier. 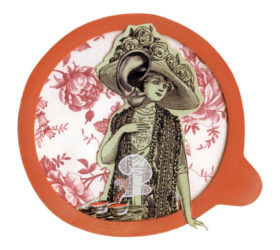