As part of the video night #8 program, Zainab Andalibe presents a selection of her recent videos: Apprentie Gnawi #1, Apprentie Gnawi #2, Feu and her latest video Récolte realized during her summer’s lab residence at Le Cube – independent art room.
This video night takes place during the exhibition by the artist at Le Cube.

In the total sum of her projects we find a simple process, often purified in a fixed plan; a frontal image and an action. These experimental videos make use of multimedia tools using an image shot in a single sequence.

Zainab Andalibe codes here by appropriating the learning of a gesture and a music usually played by men.
Physical, hesitant, conscientious or hypnotic, the rhythm produces a particular aesthetic.

In this manner, the singular rhythm and the unexpected gestures perturb the logics that characterize her piece Récolte (2014).
Récolte presents the act of planting that gradually turns into a burial. The conscientious burial moves the poetic imagery towards an agonic outcome. The final watering marks the absurdity of the act.

Last but not least, Feu, a video produced in 2012, presents a flame moving horizontally, the elevation of the flame normally being vertical here is reversed in a long, horizontal motion, almost like a floating flag. Its rhythm as well as its modified aestheticism changes its materiality thus, provoking a hypnotic effect. But we must not trust the apparent tranquility, because it is to the Arab revolutions, and precisely the immolations that preceded them, that this video refers to.

Reappropriation of customs, manipulation of symbolic elements or of vain and absurd action, coming in the image of a particular reality happening around us, every video carries a social reflection.

Description of the presented videos 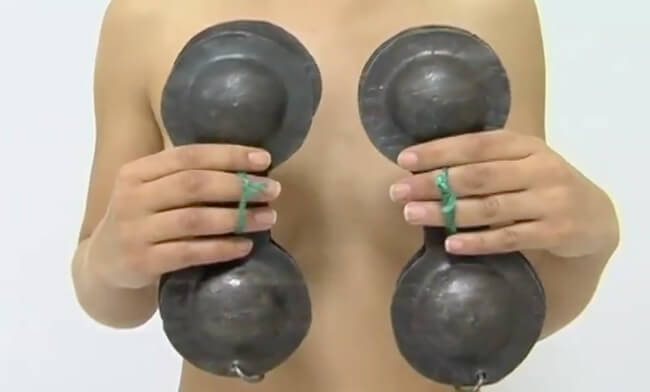