This exhibition of Wiame Haddad is a follow up of her residency at Le Cube – independent art room. It presents the photographic and video project of Ceux qui restent, which the artist has developed for two years.

“Ceux qui restent is a project of photography that attempts to mirror the journey of a tumultuous life, experienced by the anti-heroes, the former Moroccan political prisoners. Staging was a necessity for my photographic practice.

I have got the possibility to work with several former Moroccan political prisoners. After the two coups d’état against King Hassan II (1971 and 1972), Morocco has been subject to a long period of repression. Several people have been taken to Moroccan prisons, notably that of Tazmamart. This prison, located in southern Morocco, was the hell for 60 people for twenty years, more than half of them perished.  After meeting these last standing men and introducing them to my project, I try to develop a relationship with each of their stories, political background and terrible imprisonment. Footprints of an alchemy that I wish to be subtle, between survival, hope and resistance, the narratives I am trying to tell face the current social and political realities.

My artistic approach is developed at the crossroad of political engagement and aesthetic concern. The notion of suspended time is important for this project: the detainees, who have been frozen in time and terrible spaces for years, have survived in a parallel time-space.

They are outsiders who took time to die, who tried to survive outside of a daily temporality. The relation between time and body is crucial in this case, because it highlights this floating that exists between these two entities; and it is what Ceux qui restent brings to light. These bodies wandered for years, in suspended spaces, and the whole photographic purpose is to give an account of this contradiction.

The photographic proposal I am making aims to give a new dimension to the reality of these bodies. Freezing the bodies of the former prisoners, themselves frozen for several years because of their imprisonment, is a question of creating a new temporality and reactivating time. This is done by giving these bodies the opportunity to face each other in an exhibition space, thus creating an interaction between each of these portraits.

The images are conceived with the idea of movement. They refuse to generate a precise narrative. It is more about bringing out distinct pieces that take shape in a photographic assemblage.

I try to make of this project a visual strolling that captures the symbolic confrontation of these men and women who disappeared and then were imprisoned, in these dark places that history has carefully frozen in silence for so long. I believe it is necessary to focus on these bruised bodies but also on the places they have deserted, as if in the purpose to redefine these almost unreal times and spaces.

This is to set up photographic cells, and create a fictional space where all these bodies would become free to face each other again.”
Wiame Haddad

Documentation
• Leaflet of the exhibition 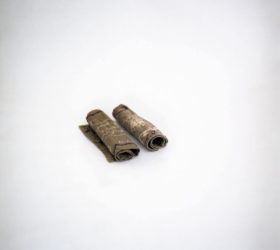 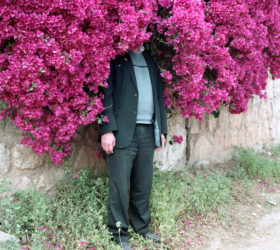