The exhibition Choses particulières presents unprecedented pieces created by the artist during her residency at Le Cube – independent art room, as well as previous projects produced in Morocco.

“Even though an object has presence, it is absence as well. The object as both a part and a mediator of stories has always occupied a special position among the other preoccupations which nurture the artistic practice of Leila Sadel.

Having grown up in two countries, Morocco and France, Leila Sadel’s work, which is of a poetic nature, has been influenced by the memories of her Moroccan childhood and her adaptation to new places.

Her approach considers real or fictional comings and goings between these two countries, where she constantly reinvents her own space, during each trip.

During the wanderings that initiate most of her artistic projects and that allow her to set milestones in the visited places, there is an accompanying need to save a memento of these explorations.

Photographs, video or sound samples and objects collected by the artist during her travels are used as notes to build up a set of subjective archives. The latter describes the usage of the place where the artist is at a given moment, its importance and its meaning.What is played out in this collection of selected pieces belongs to that which exists as it belongs to invented poetic and fantasized territory.

During a residency in Morocco in 2014, Leila Sadel is interested in the objects used for superstitious rituals. As a child, she had been witness to these rituals, but she had not been able to make sense of what she saw, and did not know the codes and the subtleties of these practices. The artist keeps the memory of an enigmatic universe where the ordinary and the invisible mix.

The photographic series Présences, shows some emblematic elements used during these rituals which are presented as still lives. In this way, Leila Sadel wishes to refer to this mysterious universe that is still very present in the daily life of many Moroccans, as well as how difficult it is to penetrate into these same daily lives.”
Excerpt of a text written by Leila Sadel, Nov. 2016

Documentation
• Leaflet of the exhibition
• Handout 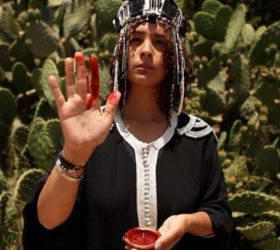