As part of this solo exhibition at Le Cube – independent art room, Echair presents a series of exclusive artworks that capture meanings, in order to transform them into aesthetic sensations.

In a minimalist, delicate and fragile manner, the work of Hassan Echair suggests a series of reflections on the coming together of antagonistic elements; it contemplates memory, environment, feelings and structures. In addition, his work also suggests reflections on weight, trace, latent energy, transparency, freedom, fragility, identity, identified / unidentified object, matter; as well as ponderings on time and on the measurement of it. In a subtle way, the projects of Hassan Echair confront us with questions on freedom, life, on the measure of time and memory. He does so with an ensured minimalism.

By means of cumulative feelings, Echair infuses the spirit of construction into his work, to generate a new dimension: that of spiritualist optics.
As if he were in a quest for the essence of existence, maybe even in a quest for poetic equilibrium, emanating from plans which come in succession, he strives to reach the intern equilibrium and to produce optical illusions for the observer. Black color serves to create the illusion of shadows. It is also the poetic and philosophical depth that is present in the movement of repetitive strings, similar to each other but also crisscrossed from time to time. Facing Echair’s installations, we feel that we are witnesses of exercises of poetry that involve calculations and applications. Sometimes, these cohabitations are suspended to the stars, by ropes, and are often hang like black stones, suggesting the current Arab fear. 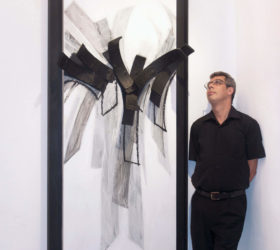