The image as seed, the word as compost

“Where to begin to tell a story?” With this question Alina Duchrow opens possible ways for us to approach Teologia Natural (Natural Theology), a solo exhibition that the Brazilian artist presents for the first time in Rabat. On the bicentenary of Brazil’s independence, this exhibition invites us to think about how the cartographies of the modern world were constituted, calling us up to re-elaborate the imaginary about a territory.

The exhibition title mentions the “Christian belief according to which nature existed for the improvement of mankind, (…) an idea widely accepted during the 19th and 20th centuries, mainly by the British Empire: the natural wealth, spread across the ends of the Earth, did not belong only to one people and should be made available to all” 1.  However, more than a religious issue, mercantile interests advanced over the territories of the Americas, Asia, and Africa and imposed themselves.

Via videos, installations, and drawings, Teologia Natural  brings together current debates on Nature, extinction, collective memory, and historical production, connecting them to the artist’s family memory and an event that marked the history of the occupation of the Amazon and the development of world industry: the extraction of latex for rubber production from the sap of the Hevea brasiliensis, the rubber tree.

In the installation Eldorado we are confronted with a series of hybrid images born from the oneiric approximation of stories, beings, bodies, myths, objects, and sensations related through rubber exploitation in the forest. One of the drivers of colonial extractivist violence, the search for Eldorado was what Isabelle Stengers called “capitalist sorcery”. 2

The video A semente (The seed) links the life of the tree to human and non-human lives transformed by its discovery and the newly industrialised world. Like a storyteller who needs to keep the thread of life burning through memory, the artist’s voice crosses a complex web of events in which the visible and the invisible intertwine, bringing us to another reading of the present and of Nature. 2

Quem me encontrar parado me empurre para o meio (Whoever finds me standing still push me into the middle) was the text wrote on the surface of a miniature boat on a 1915 photograph found by Duchrow inside a book. Migrant workers who left to the forest without knowing if they would ever return used these simple artefacts as a means of communication and an act of faith. In the video, the artist reads a 1953 letter while we see her pushing a boat on the river. It denotes the desire to guarantee the memories flow in an explicit refusal to deletion, thus avoiding forthcoming shipwrecks.

In Medicina (Medicine), thin latex membranes moulded from industrial rubber and plastic surfaces create a new landscape placing us before the spectral memory of vegetal matter. The skins operate in a kind of restitution of the sap to the living world from which it was taken.  The work seeks to be an antidote, a counter-spell made of language to subvert the symbolic logic of commodities’ perverse path.

Between shipwrecked stories and the memories of a body in constant displacement, the artist embraces language as a way of re-signifying the trauma of history, opening herself up to listening to the territories on which these multiple and polyphonic narratives are inscribed. In a new possible arrangement, life reorganizes itself and renegotiates spaces of existence in despite of everything.  Life, like death, is also inescapable.

1 Joe Jackson. O Ladrão do Fim do Mundo. Rio de Janeiro: Objetiva, 2011. In this book, the author describes the theft of 70,000 Hevea brasiliensis seeds by an Englishman. After that, England started growing it in its tropical colonies, breaking the Brazilian rubber market and gaining world monopoly. 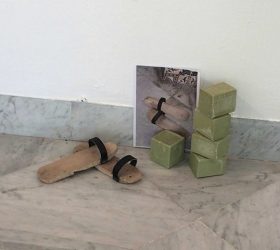