Le Cube – independent art room gathers, for the third edition of its curators zone, the artist Soufiane Ababri and the curator Karima Boudou.
As a follow up to a residency at Le Cube – independent art room, the project What’s the Name of this Nation (WTNOTN) comes in the format of a magazine. It proposes an exploration of the diverse processes through whom ancient Egypt can be re-evaluated under the prism of the African identity.
In dialogue with the magazine and its contributors (artists, poets, choreographers, activist, art critics), Le Cube hosts fragments of narration and proposals by Soufiane Ababri in direct echo with the magazine, questioning the way the past can be contained in a wider dimension than culture.
A series of gatherings and presentations is organised at Le Cube during the residency.

Long before the world wide web, the streets were the disseminators of information. Urban dwellers would often find rising before them on readymade pulpits or soapboxes, street corner orators of all varieties expounding on all matter of subjects. In the first scenes of the exhibition What’s The Name Of This Nation, pyramids similar to spaceships from an idyllic planet set course for the Earth. It seems like Sun Ra is in command. From behind our keyboards we pilot together the music-driven ship and its crew, the intergalactic WTNOTN, first to Egypt and then, across deserts, mountains and cities in Africa, and then to the United States. Remember that Sun Ra has come to our planet with a mission: the salvation of the Afro-Americans.

The exhibition and magazine WTNOTN offer the possibility to temporarily leave the planet Earth and to build a new life with or without the interference of domination, class, gender, race and identity. The Earth is doomed, the arrival of WTNOTN is an omen of the Apocalypse. When the magazine and the exhibition land, surrounded by pulsating laser beams, set foot on the art space Le Cube, a prophecy is fulfilled and the end of time has come. Sun Ra explains: “We work on the other side of time”. One of the backholds of the exhibition, presenting the work of artist Soufiane Ababri, is the film featuring lebanese choreographer Alexandre Paulikevitch. He is in Beirut performing Baladi dance, reminding us of Egyptian deities practicing dance rituals as they took place in Ancient Egyptian mythology. As with Sun Ra who pleaded for a spiritual liberation that can only be achieved through ascesis, discipline, study and submission to cosmic hierarchy; the body and the mind become tools for political and social resistance.

What’s The Name Of This Nation’s principal theme is the alliances between African identity and Ancient Egypt’s lens through an exhibition and a magazine, the latter aimed at teleporting itself from the apartment of Le Cube as a spaceship, as in a Star Trek episode lifting off and leaving the earth further and further behind. It dates from 2015 and is largely set in the center of Rabat, Morocco, at the moment the stronghold of Le Cube. At the entrance of the exhibition space, Ababri’s work Egyptomania (2015) depicts a vandalized 19th century replica of an Egyptian statue to be found in Paris. This vandal intervention suggests that this history, which distorts facts in order to found a supremacy on false evidence, needs to be re-written by a younger generations who wants to take back its past. For instance, Soufiane Ababri’s corpus of artworks in the back room of the gallery proposes a view of the history and the future of the Africans and Afro-Americans. The works are set as an open concept providing a mixture of black Bible interpretations through a soundtrack from an African-American tour guide in Egypt (claiming that everything that the ancient Greek knew had been stolen from the Egyptians), a sand dune in the corner of the room (Untitled (sand stacks), 2015; disposed à la Félix González-Torres and sticking and contaminating the shoes of the visitor without her/his will), a colourfoul pyramid as a sculptural hybridization with an African mask (Pyramid III, African Spiritual Concepts at the Temple of Aset (Isis), 2015), and an historical part with a collection of six photographs from colonial times in Egypt (Untitled (LE TOURISME DE DESTRUCTION MASSIVE), 2015).

The various contributions in What’s The Name Of This Nation suggest that we can only free ourselves from our ‘inverted positions’ on this planet through various myths, through the powers of imagination, through music and various disciplines that arise the spirit to another world. Sun Ra once explained to his students:
“I see myself as P-H-R-E.
P-H-R-E but not F-R-E-E. That’s the name of the sun in ancient Egypt”.
Karima Boudou

The satellites are spinning,
a better day is breaking.
The galaxies are waiting
For planet Earth’s awakening.
Sun Ra 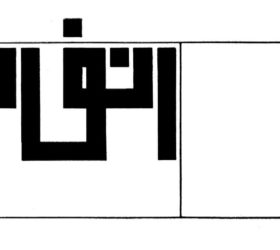 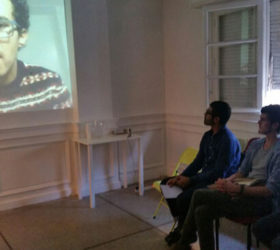