The contemporary art centre Villa du Parc invites Le Cube – independent art room to curate an exhibition in Annemasse in early 2022, which will present the singular and complementary practices of three Moroccan artists.

For several years, the writing of history has been called into question by the consideration of missing, fleeting or discarded archives that disturb our relationship to positions that were thought to be objective and immutable.
It is in this context and on its own scale that the exhibition Quand je n’aurai plus de feuille, j’écrirai sur le blanc de l’oeil leads us to hidden or marginalized narratives and to their emancipating powers in our contemporary societies. It invites three artists who are interested in the potentials of craft and orality practices that, beyond ornament or celebration, transmit messages and narratives fundamental to communities. If these knowledges and their contexts are put in the shadow of more accepted historiographic forms and are lost in the chains of thought production, M’Barek Bouhchichi, Abdessamad El Montassir and Sara Ouhaddou propose to return to these ancestral expressions of knowledge, scratching their surface to plunge us into the interstices thus opened up of the narratives and contexts they carry.

Thus the works presented in the exhibition echo different contexts in many regions of Morocco.
M’Barek Bouhchichi‘s installations focus on the knowledge and practices of craftsmen and men of the land whose gestures are perpetuated in the resilience of new industrial processes, systematized and serialized. It is also more specifically the question of the place of black Moroccans in today’s society that the artist addresses through his projects. The latter are produced in collaboration with potters, ironworkers, coppersmiths or goldsmiths, to highlight both their status and the specificities of their know-how.

Sara Ouhaddou works with artisans in several regions of Morocco and sets up collaborations in which gestures and techniques are shaken up, questioned and explored, inviting each one to reconsider the codes of his or her own practice and the narratives they carry. Her projects are real spaces of encounter between each craftsman and Sara Ouhaddou, where the final form of the work takes shape as the collaboration progresses. At the same time and on a different scale, it is also the question of the economy and autonomy of these workers that Sara opens up through her projects and the exchanges they establish.

Abdessamad El Montassir relies on orally transmitted poetry in the Sahara in southern Morocco and on non-human knowledge (of plants and landscapes) to develop narratives that face, in a hollow way, the silence of History. His films and his sound and visual installations tell the story of knowledge, forgetfulness and non-transmission of history.

His films and his sound and visual installations tell of the knowledge, the forgetting and the non-transmission of the history of this region, while respecting the right to forget claimed by the elders and considering the traumas of anticipation of his contemporaries.

Thus, through a long-term process, the works of M’Barek Bouhchichi, Abdessamad El Montassir and Sara Ouhaddou gathered in Quand je n’aurai plus de feuille, j’écrirai sur le blanc de l’œil, reveal the specificities of these knowledges which, inherited for centuries and in perpetual reinvention, inform us about current realities and trajectories.

Invited by Gabrielle Camuset, art historian and searcher Maud Houssais presents the archival exhibition CASABLANCAS, which imagines a visual wandering through the city of Casablanca of the 1960s and 1970s, using archives and documents to bring together artistic practices that work to produce the city. The invention of a new visual culture is a crucial issue in the elaboration of a project for society that must also come about through the image. In this respect, the Casablanca School of Fine Arts, directed by Farid Belkahia between 1961 and 1974, is the fertile ground for a way of thinking about the city that places the artist in the position of a full-fledged prescriber. Exhibitions in the public space, graphic design, interior and urban planning and social photography became the touchstone of a decolonial art form that was committed to society.

1 The title of the exhibition is taken from a poem by Abdallah Zrika
(in English: When I run out of paper, I will write on the white of my eye) 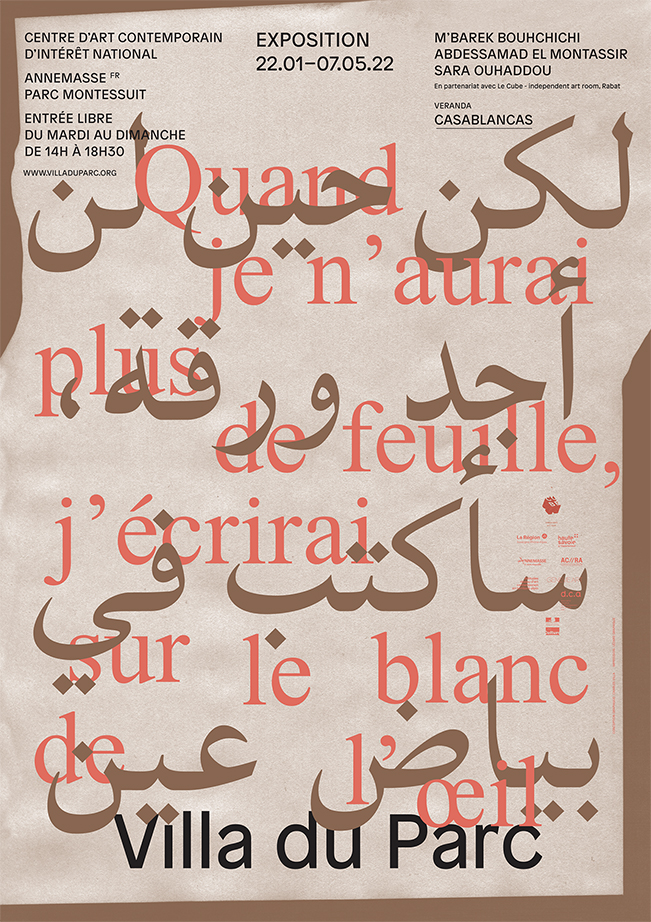