“In the Global North, palm trees and other “exotic” plants are admired and contemplated in greenhouses, botanical gardens and palm groves. They are reminders and witnesses of the colonial practice that, for centuries, arbitrarily dispatched not only humans, but also their plant-based roommates, categorized them “scientifically” and exploited them to death. The palms have become tired of it.

As a result of rapid global warming, palms and their natural friends will soon be able to live anywhere, even outside of greenhouses, in formerly colder regions.  But climate change is actually posing a serious threat to their natural habitats. Even palms can no longer withstand storms, heat waves and floods. The increasing number of natural disasters and the danger they pose give a glimpse of how things are changing for humans.

The exhibition brings together various works on the theme of palms and other plants with migration background, which symbolically shift borders. All the artistic positions have in common that their plants suffer and tire symbolically under the weight of all the projections they have to absorb, the real torments they are exposed to or the eternal misunderstandings and misuses of their vital space.

Tired palms are symptomatic of the fatigue of a society that cannot find rest despite sleep. Palms, perennials and other so-called exotic plants offer themselves as surfaces of projection with multiple interpretations – somewhere between the luxuriant distance, the dreamed vacation feelings or the “sad tropics”.

Ghita Skali invites us on a fictional tour of the palm antennas of Morocco. Antennas and radio stations have long been disguised as nature all over the world, including palm trees in Morocco. Conversely, she has printed these antennas hidden in trees and palm trees on wallpaper, bringing back the discourse of “oriental” wallpaper and furnishings that have marked the Western view of the world for centuries. Her offbeat wallpapers show a reality check with the romantic image through which we like to admire every distance.

Seif Kousmate draws attention to an acute local problem. Over the past two centuries, two-thirds of Morocco’s 14 million palm trees have died. He has visited oases that are severely affected by the climate catastrophe. His photographs in the series Waha  ( واحة ), which means oasis in Arabic, do not show romantic places of nostalgia, but abused and dying places, where both human and plant inhabitants are destined to disappear.

Christian Kosmas Mayer borrows a living banana tree for his installation Coup de soleil. The leaves of this tree can carry images inside themselves if photographic negatives are placed on their leaves for several weeks. The photosynthesis of the plants then becomes a photograph and produces ephemeral images in different shades of green. The process that makes photos appear on the skin of Instagram users, who started the craze of “sunburn art”  since the summer of 2015, works in a similar way, although it is pretty unhealthy and all red. Mayer inscribes images of this human sunburn art on the leaves of plants, which is safe for them.

Wind-distorted palms, whose curvature and blowing should visually read the force of the wind, are a classic image in hurricane coverage. The most common palm species in Florida, Dictyosperma album, is also called “hurricane palm”, because of its ability to drop its leaves in strong winds to prevent serious damage to the trunk. For her series How to fold a palm tree, Roswitha Weingrill installs a palm tree made of different pieces of fabric in the space and refers to the catastrophic state of our planet.

Edith Payer presents a site-specific installation, Anthropomorphic Notes On Palms, a series of drawings, graphic sheets, photographs, and collections of materials that examine the anthropomorphization of plants, specifically palms. While anthropomorphism is often considered an inappropriate humanization of research objects in the natural sciences, an animistic view of the world always reveals an emotional relationship with it and allows, in certain circumstances, for a more careful treatment of it.

Regula Dettwiler presents in her work Natural history of the artificial world watercolors that, at first glance, resemble herbariums, biological studies of plants. However, her objects of study are not living beings, but parts of plastic plants; the material without which nature would be completely unimaginable nowadays.
On the other hand, her lace-bordered houseplants are an exaggerated formulation of a naive concept of nature.

In Katrin Ströbel‘s installation Ile de Gorée, we see a palm-fringed (urban) landscape of the island of Goree, the island off the coast of Senegal on whose land so many people were sent as slaves from the African continent to the Americas.  Katrin Ströbel blows an artificial wind on the palm leaves through a fan. The sadness of the history they have lived through is inscribed in them. At the same time, they have to sway in the wind and still serve and maintain the image of an exotic and romantic faraway place.

Documentation
Leaflet of the exhibition 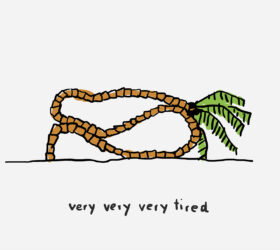